Given the current economic climate, the satirical answer to this question would be “not a lot”. But, that may not be the case. Out there in money jars and down the backs of sofas may be rare British coins that could fetch a pretty penny indeed.

What are rare coins worth?

In 2016, the government released the new polymer £5 banknote. Four of these new notes were engraved with a tiny portrait of Jane Austin and distributed into circulation. Each note was worth £50,000 and caused a surge in speculation as to the value of “special” notes.

Odds are, you never saw one of the valuable notes, but it did result in a rather excellent pub joke.

These notes also shed a light on the curious world of coin collecting which, after just five minutes of researching, will have you looking closer at your change forever more.

Tiny imperfections and errors in printing make some coins and banknotes rather unique. Given the 2 billion notes in circulation today, that also makes them rare and thus, worth quite a bit of money.

Some coins can fetch over a thousand pounds and could be sitting in your penny pot right now.

So what should you look for?

What are the most valuable coins in the UK?

The Charles Dickens £2 is a rare special edition coin that was minted to commemorate the famous author. In addition to having a limited print run, several of the coins had minting errors, which make them rarer still.

The imperfections are pretty easy to spot. If the writing is upside down, you’re holding a £2 worth almost £3,500!

Did you know that all two pence coins minted before 1982 say “New Pence”, while those printed after say “Two Pence”? Well, they should, but an early run of 1983 2p coins was accidentally minted with the old text.

A coin that’s more than thirty years old is probably going to be hard to find. A coin that’s just over ten years old is much more likely. In 2008, 250,000 20 pence pieces were accidentally printed with no date on them.

It seems odd that print errors can occur in the 21st Century, but human error and oversight continue to play a role in the world of misprinted coins.

Despite the 20p’s rather obvious flaw, it’s still classed as legal tender and it’s surprisingly common even today.

They sell online for as much as £100 online.

Typos are embarrassing the best of times, but imagine that instead of sending a typo to your friends on WhatsApp, your typo is immortalised in coin form.

To give you a sense of the scale of this error, look at your computer keyboard and find the ‘R’ key. Now, look at the ‘P’ key. See how far apart they are?

It seems highly unlikely that you’d type ‘Pemember, pemember the Fifth of November’. But, that’s what you’ll find engraved on the Guy Fawkes Commemorative £2 coin.

This error wasn’t caught until after the print run ended, so there are loads out there that fetch up to £10 each on eBay.

You may have seen the much more common second print run of the Olympic Swimmer 50p, that was minted in 2016 to celebrate Team GB.
But the initial print run saw only 600 Olympic coins printed with a slightly different design. You can tell if you’ve got an original by checking to see if the wavy lines continue over the swimmer’s face.

Despite being so new, these rare 50ps could fetch around £800.

The limited edition Beatrix Potter 50p coins were released to specific attractions and National Trust properties. They are considered one of the most popular of the modern rare UK coins. The Royal Mint sold coloured versions for £55 each and they sold like hot cakes!

Despite so many being issued, there is still a high demand for this coin, which can easily be worth over £100.

One of the rarest £2 coins in circulation, less than 500,000 of these Northern Ireland 2002 Commonwealth Games coins exist. Generally, you can fetch between £15-£25 for one of these.

As one of the nation’s best-loved and respected organisations, WWF holds a special place in the hearts of animal and nature lovers alike. 50 years after it was launched, The Royal Mint launched a special edition 50p coin in recognition of the organisation’s great conservation work. The WWF 50p depicts 50 plants and animals, with the famous panda logo in the centre.

3.4 million WWF coins were printed, but you can get around £10 for one if it’s in good condition.

New £1 coins are minted with the 2017 date on them. But, a few ‘trial coins’ were released ahead of time, which were distributed in advance to a variety of shops and business to ensure they worked in vending machines and tills.

They’re simple to spot – if they’ve got the date 2015 or 2016 stamped across them you have a “trial” coin. These have been seen on eBay for some ridiculous prices, from £6,000 to £300. The verdict is still out on where the price will settle, so you should probably hang on to them for now.

In 2009, the Royal Mint issued a 50p that shows the famous Padoga located in Kew Gardens to celebrate the Gardens’ 250th anniversary.

Last year, one of these coins went up on eBay, selling for £1,000. Despite being advertised as “the rarest coin in circulation today”, the view from collectors is that £1,000 is a little ambitious.

More realistically, you can get as much as £5 from the right buyer.

Which just goes to show: don’t buy into the hype!

So, next time you need to make a purchase, you might want to break that ten pound note. You never know how much your change is worth… 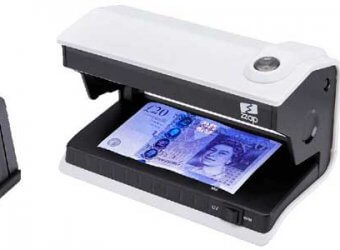