If you own a cash-handling business, you’ll certainly be interested in ways to protect yourself and your staff from counterfeit thieves. Luckily, there are several products available to help with this. As an example, the ZZap counterfeit detectors are all designed to verify banknotes more efficiently than even the most experienced cashier. Before we look into the different kinds of counterfeit detection technologies to protect your business, let’s explain why fake notes are a real threat to your business every day.

The history of counterfeit money is a tale as old as the currency itself in many ways – as long as currency has existed, people have tried to make fake versions. Based on percentage, the Great British Pound is the most counterfeited currency, but in absolute terms it’s the United States Dollar. If you look on the Euro zone alone, the number of fake notes has steadily risen each year since it came into circulation in 2002.

Why should you care about this?

Well, the simple fact of the matter is counterfeit banknotes are completely worthless and there is no compensation for accepting these, even if you have done so by accident. It’s completely up to you to protect your business, and your profits, from counterfeit banknotes. It’s a real problem – counterfeiting is estimated to have cost the EU more than 500 million euros since the Euro was introduced, and while that cost is spread over many businesses, you can imagine how much it could affect a small business if it were to happen regularly. If you think about it, investing in a counterfeit detection device means it will pay for itself quickly simply by detecting fake notes. Once detected, you can confront the thief and refuse to take their money, therefore saving your business the hassle and money loss of accepting a fake note.

Let’s take a look at the different kinds of counterfeit detection available, to help you choose which might be best for you. 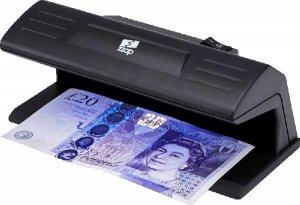 As you may be aware, banknotes incorporate invisible UV marks that will only become visible when under an ultraviolet light as a security precaution. And it can’t just be any ultraviolet light, it needs to be at a wavelength of 365 nanometres to detect. ZZap counterfeit detectors such as the D20 help to show these UV marks instantly so you can visually verify notes. There are also more advanced ultraviolet detectors available such as the 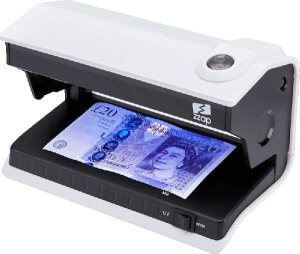 Banknotes also have something called ferromagnetic ink printed on them in complex magnetic patterns. On top of that, magnetic thread is also waved into the notes in specific sizes and locations, so they are much more complex than you may think. This helps us to use magnetic detection as a means to verify notes. Some options include manual magnetic detectors such as the ZZap D30 which can very quickly check notes to see whether or not they include magnetic ink or thread. You also have the option of a more advanced magnetic detection device like the ZZap D40 which is able to detect more sophisticated fake notes by identifying specific ink and thread patterns through various magnetic sensors. 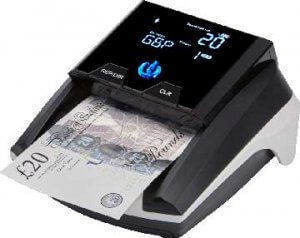 As well as magnetic ink and threads, banknotes are also printed with inks that are invisible to the naked eye. And on top of having the UV markings previously mentioned, they also have inks that will only become visible under infrared light. In order to use this kind of detection, you’ll need one of ZZap’s D40 machines which uses infrared sensors which reflect and absorb light to automatically approve notes using the special characteristics marked on each denomination.

By size detection devices, we mean detecting by half-note, width, thickness or 3D. Each denomination of a banknote has exactly the same length, width and thickness, so this is yet another means to check for fake notes. Counterfeit note detectors such as the ZZap D40 can verify dimensions down to a tenth of a millimeter by pulsing LED transceiver pairs and infrared sensor banks. Pretty clever, right? 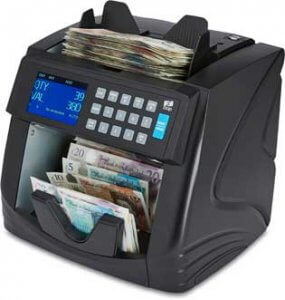 Each banknote has its own unique serial number on each side of the note. Detection machines such as the ZZap NC60 money counter use an advanced CIS sensor to scan and record the serial numbers. CIS stands for Contact Image Sesnsor, and while it’s not so much a form of counterfeit detection on its own, it is the banknote recognition technology that helps serial numbers be detected. On a NC60, the full detailed list of all the scanned serial numbers can be viewed, saved and printed through a PC. These kinds of serial numbers are useful for financial records or to provide an audit trail. 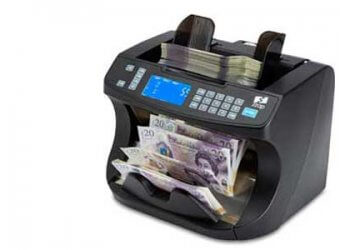